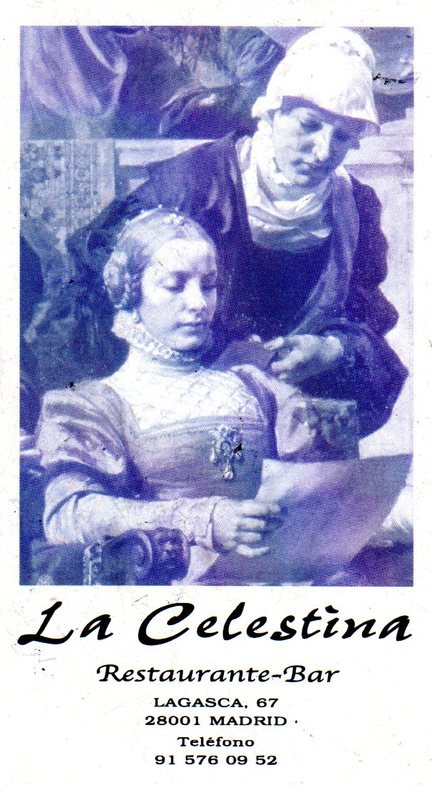 Blue monochromatic fragment of the painting Patronage of the Arts by the House of Habsburg (Patronazgo de las artes por la casa de Habsburgo), by Julius Victor Berger (Kunsthistorisches Museum of Vienna). The seated young woman is Isabella of Portugal. Amaranta Saguar writes about this card and the painting:

Christmas season is a time for feasting and, as such, I find it appropriate to write about the restaurant called La Celestina in Madrid. Obviously, I am not interested in its homemade traditional food, but on its choice of name and, above all, on its choice of image for its card.

Instead of using any of the available Celestina‘s illustrations, the picture on the card corresponds to a detail in the 1891 painting “Patronage of the Arts by the House of Habsburg” by Julius Victor Berger (Kunsthistorisches Museum of Vienna). In it, the empress reads a document, presumably a letter, which a servant lady (?) also reads over her shoulder.

The interesting bit about this choice of image is that, deprived from its context, Isabella of Portugal is irremediably identified with Melibea and the servant lady is identified with the go-between, although there is no letter reading scene in Celestina. In my opinion, this is only possible because both figures correspond to the traditional mental image of a fifteenth century lady and of a fifteenth century older woman. However, this does not fully explain why this was the image chosen for the card. Were there not enough fifteenth and sixteenth century portraits to have to resort to a nineteenth century painting? Not enough illustrated editions of Celestina?

It would be worth asking the owners of the restaurant. Maybe the next time I am in Madrid.