ONCE lottery ticket the Garden of Calixto and Melibea, Salamanca Town Hall (2017) 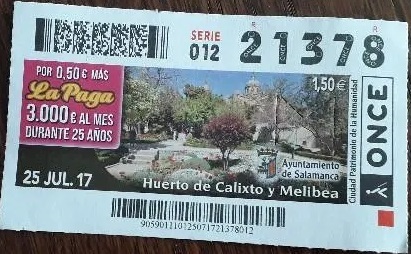 ONCE lottery ticket the Garden of Calixto and Melibea, Salamanca Town Hall (2017)

ONCE daily lottery coupon on July 25, 2017, Salamanca Town Hall. In the coupon image, the Calixto and Melibea garden in Salamanca, Spain.

"This garden was built on the old wall, and offers the visitor a good view of the city of Salamanca and the river Tormes. Its design tries to give the site a romantic and medieval air. It has hundreds of arboreal and floral varieties, and an area of 2,500 square meters. The park was inaugurated in 1981. At its entrance there is a statue that represents the most famous procuress in Spanish literature, and in which the following inscription is reads: “I am an old woman like God made me, no worse than all. If I live well or badly, God is the witness of my heart ”, words from 'La Celestina ’." (Translated description from the ONCE webpage, https://www.once.es/noticias/el-huerto-de-calixto-y-melibea-protagonistas-de, Archived in:  https://web.archive.org/web/20210108014255/https://www.once.es/noticias/el-huerto-de-calixto-y-melibea-protagonistas-de).

Other works that are also located or inspired by Melibea's garden in Salamanca include: Statue of Celestina in Calisto and Melibea's Garden, Salamanca, by Casillas (1976), Photo series of The Story of Melibea (La historia de Melibea), by Constantinou (2014, c.), Photo in the Garden of Calixto y Melibea, by Culla (2016), "The flight of Calixto" Artistic dream for the Melibea Garden in Salamanca, by d’Ors (2010) and Representation of the Salamanca Plazas and Patios Touristic-Cultural program, Salamanca (2017).

“ONCE lottery ticket the Garden of Calixto and Melibea, Salamanca Town Hall (2017),” CelestinaVisual.org, accessed May 18, 2022, http://en.celestinavisual.org/items/show/3285.