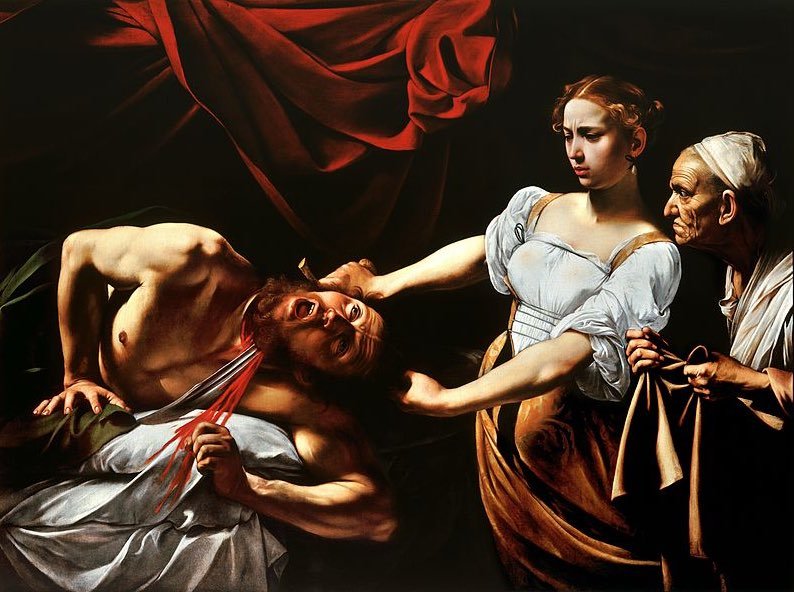 Although, evidently, the maid is neither a celestine nor a procuress, she is represented in the painting with typical traits of these characters. The three, young woman, old woman and man, is typical in the celestine, the client and the protected scenes.

"This servant also changes her appearance and duties from one period and from one century to another, much in the same way as Judith and David, as we shall see. In the Middle Ages she is usually shown as a young maiden or woman at Judith's side often carrying a sack; during the Renaissance she wears fashionable clothes of the period (but less colourful than those worn by Judith) and is often portrayed as a negress or mulatto at her mistress's side holding open the sack while Judith deposits the severed head into it. In the late sixteenth and seventeenth centuries she is depicted as an old hag (often in the guise of a procuress) or as an equal assisting Judith to hold down the body of Holofernes while Judith callously murders him. In the eighteenth century she usually stands behind Judith in a subsidiary role, while in the nineteenth century she disappears from the images altogether as artists concentrate on more overtly sexual aspects of the story." (Philpot, E. (1999). A comparative study between the images of Judith and Holofernes and David and Goliath in the history of European art with special reference to the period 1400-1700. (Publication No. 10392503) [Master's thesis, The University of Glasgow]. ProQuest LLC. pp. 40-41).

"Unlike the spatially expansive paintings of the Renaissance, Caravaggio sets the figures of his scene much closer to the picture plane in a darkened interior, not only to stress the clandestine nature of her operation, but also thereby to heighten the physical and psychological presence of the characters. He presents these as strong opposites - both in age and appearance, in line with the late Renaissance theory of contrapposto.(17) At Judith's left shoulder stands a wrinkled old hag holding up her skirt ready to receive the head of the general, in sharp contrast to the dignified Judith, who in turn is the antithesis of the muscular and virile Holofernes. In this juxtaposition of the elderly and ugly with the young and beautiful Caravaggio was following the recommendations expounded by Gregorio Comanini in his treatise Il Figino of 1591, which states "And as the poet plays with antithesis, or with contrapposti, so the painter counterpoises in one painting figures of women and men, infants and old .... next to a beautiful girl an ugly woman."(18) What Caravaggio has also done is to portray the maid servant in the role of a procuress." (Philpot, E. (1999). A comparative study between the images of Judith and Holofernes and David and Goliath in the history of European art with special reference to the period 1400-1700. (Publication No. 10392503) [Master's thesis, The University of Glasgow]. ProQuest LLC. pp. 131-132).

Paintings and engravingsdepicting a procuress