1841 (there is an 1842 edition). Some editions were printed without illustrations. 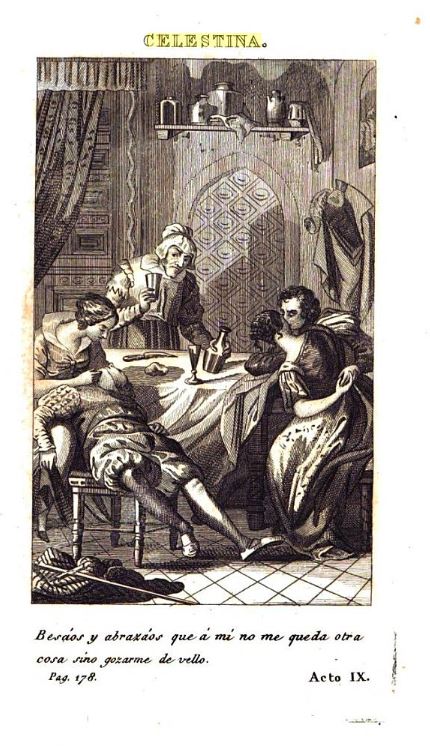 (Click the image for more information and other images)

Contains three (four) anonymous illustrations with a romantic tone. The first, from the banquet from act IX, is curiously placed at the beginning of the book and not in its right place. There is also a small cupid as the colophon of the chapters. However, the edition from the BN R-12277 contains another image that illustrates act VII, Pármeno and Sempronio's visit to Areúsa's house. Is this a case of censorship of this image because of its content en some copies or has it simply been ripped from the page? It should be verified if this difference es between the 1841 and 1842 editions. Another possibility is that the engravings were initially in looseleaf form, which were given when the book was bought.

Some images of cupids as the chapter colophons.

Digitalized on Google Books (oct. 2015) from a copy with an ex libris from the Diputación Provincial de Barcelona. This edition is from 1841, with only three engravings, but it curiously has on the cover on Google the engraving that is missing, act VII's.

Digitalized on Google Books (oct. 2015) from a copy with an ex libris from the Diputación Provincial de Barcelona. This edition is from 1841, with only three engravings, but it curiously has on the cover on Google the engraving that is missing, act VII's.

Illustration of act VII from the Barcelona edition (1841) 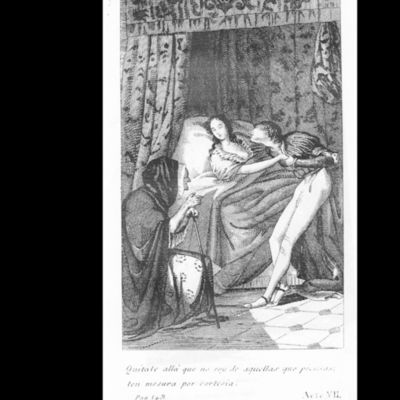 This illustration is missing in some editions. The moment in which Pármeno approaches Areúsa's bed while Celestina watches the scene (p. 149). At the foot of the scene Areúsa's words can be read: "Quítate allá, que no soy de aquellas que piensas, ten…

Illustration of act IX from the Barcelona edition (1841) 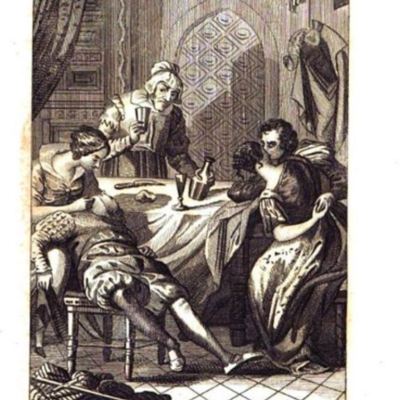 Banquete scene in Celestina's house (p. 178). She is represented with an envious expression, contemplating the lovers while they kiss, while she grabs the jar and cup of wine to serve herself once more. At the foot of the page it says; "Besáos y…

Illustration of act XII from the Barcelona edition (1841) 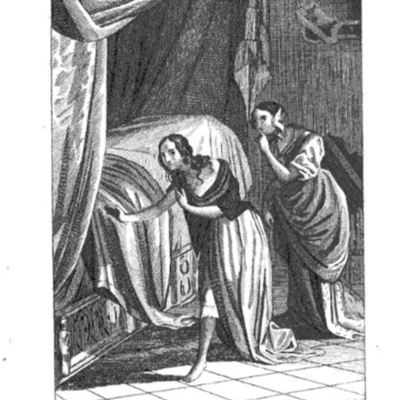 Melibea goes out by night, accompanied by Lucrecia (p. 229). One of the two holds her index finger to her lips in a signal to be quiet. The foot of the image says: "Qué harían si mi cierta salida supiesen?" ("What would they do if they knew of my…

Illustration of act XIX from the Barcelona edition (1841) 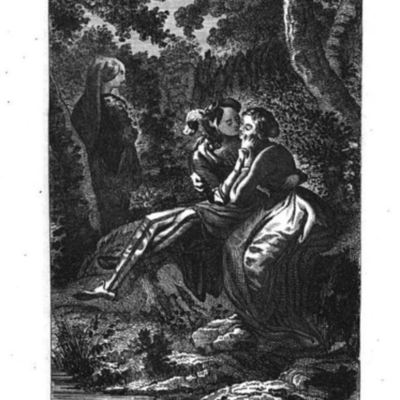